Sorry I almost got you killed (The Infamous TRAIN incident)

Recently I interviewed a woman to join API. During said interview I told her that I was “Fearless to the point of stupid.” I admit that despite higher education and years of experience, I still do dumb shit. Ask any member of my family and they will have a story. The most reason example recurred just last night. Thankfully, Lesia has a great sense of humor because I almost got her killed.

Back story: We had been to the site of the McDonough train crash during one rainy afternoon. The train company was working on the track. Between the rain and the maintenance, we couldn’t really investigate. We just walked around, took some pictures, got some general readings. We took note that the closer the tracks got to the bridge, the less path we had to walk on. The sides were incredibly steep. We had agreed to go back and to also visit the memorial that had just recently been placed near the crash site.

I took it upon myself to get some evidence. REAL evidence. AWESOME evidence. I am convinced that if I could just get down to the actual river, I could get some good stuff. Therefore, I bought rock climbing shoes and weighted rope. I borrowed my husband gloves from the fire department and his headlamp. My husband was not supportive of the idea and Lesia assured him she would not let me hurt myself.

The memorial seemed to be a bust. It seems logical that it would, however, since it was erected more than 100 years after the crash. The survivors had no idea it was there or has any meaning for them. It was also cold so we decided to go to the crash site itself.

We pulled up and I put on my new climbing shoes, headlamp and grabbed the gloves and rope. Lesia pulled out the camera and I jokingly said that she was filming my last moments. We began walking around, taking pictures, getting words off the radar and ovilus. I realized I was walking much further ahead than Lesia. She said that if a train came she couldn’t hustle fast enough to get out of its way and didn’t want to dive off the steep cliff to avoid being killed. I asked her to just walk closer to the bridge because that’s where I was headed. She agreed. Suddenly she says to me, “Is that a train light?” I turn and say, “No. It can’t be. It doesn’t look like it.” But of course it was. By the time I realized it the train was nearly on top of us. Luckily we were still at a part of the tracks that had plenty of room for us to step back. Although we were out of the “Zone of Danger” (Palsgraff pun), the wind coming off that train was a force with which to be reckoned. Between the strong gusts and the light that wasn’t distinguishable until its on top of you I began to understand how it is that people die by train.

The train passed and I continued forward. Lesia stayed behind. I made it to the bridge. I took some photos and sat on the edge, right by the sign that says “NO TRESPASSING EXTREME DANGER.” You know me, fearless to the point of stupid. I begin an EVP session and try to see if there is a way to get down to the river. I take some pictures… and then I see the light. The light of an oncoming train from the opposite direction the other train had just come from. My exact words, as captured on my EVP, were “Oh shit. TRAIN!” and then a few seconds later “Oh shit!” Lesia heard both things. She says her brain instantly went, “Huh?” and then she dove down as far as she could to the ledge where she was. I began what can only be described as the fastest hundred yard dash in the history of mankind. Considering I was not dressed for the Olympics and carrying my equipment in a bag, running in climbing shoes down a gravel track, I was damn proud of how fast I hauled my ample ass. During the sprint I heard something fall out of the bag and hesitated for a split second, at which time my brain said “RUN YOU MORON! You can come back for it later!” I jumped off the track and down the embankment to a place of semi-safety. The train rushed past me. I could tell I was too close to the train because I felt like if it hit a rock or something just the right way, it would propel it at hurricane force at my head and kill me dead. I scooted down the embankment a bit more, but I was still too close for comfort. On the flip side I was also too close to the edge of the embankment’s cliff. I had nowhere safe to go. I looked at Lesia. I kept thinking, “If we survive this, she’s going to kill me. She told me this was the EXACT situation she was trying to avoid. She’s going to kill me.” Lesia told me later all she could think was, “Jen is really close to the edge.” Luckily this train was shorter than the last one so I was able to hop up and run to make sure Lesia was okay. I was laughing hysterically. Since we had survived it was now hilarious. I couldn’t believe the entirety of the situation. I actually probably would have been safer had I dove down under the tracks, where I wanted to be in the first place. Although I can’t imagine the horror Lesia would have to face to try and walk down and try to find a friend who was on the tracks before the train but not there after the train. I agreed that we could pack it up and head home.

Next time, we agreed, we would need a train schedule at the very least. We joked about how our husbands would probably not like me after nearly causing our deaths. Mine in particular said Monday I was getting a life insurance policy, no exceptions. We also laughed that Lesia now has leverage for the next time I try to talk her into doing some stupid. AND we better have caught some incredible evidence. 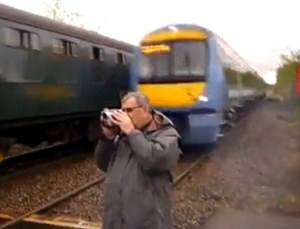