Doctoring a photo or video can be wonderful fun. It can make us look however we desire without plastic surgery. It can allow us to make funny pictures and create wonderful memories. It also can contribute to the slow demise of paranormal investigation.

Why do people feel the need to doctor photos or video in a feeble attempt to prove life after death? First, the goal may not be to prove life after death but only to prove that some people will believe almost anything. By proving how gullible our audience is, the person who doctors evidence is trying to prove how our investigations are just manipulation of the weak minded. By proving how easily people fall for fake evidence, the person is saying that by believing anything they, in essence, believe in nothing. There is no life after death only doctored images to con those who seek to prove otherwise.

The person who doctors evidence may also be desperate to prove life after death. Some of you may recall the doctor who altered his findings to prove a link between vaccines and autism. He was so sure he was right and was so eager to prove he was right that he lied. He altered findings. He manipulated data. He was shamed, cast out, and reviled among many. I am certain there are a few outlaying investigators who do the same. Thankfully, I believe the good majority of investigators would never consider doing such a fraudulent act.

The person who doctors evidence may want their 15 minutes of fame. I think this is the broad majority of people. On the plus side, I don’t believe the majority of these fiends are investigators; I believe them to be graphic artists and the like just trying to ply their trade. They want to see how talented they are by placing doctored “evidence” on the internet to see how many people fall for it. The more people that fall for the fake, the better the job done by the faker.

I will admit this: I have been uber tempted to put up evidence I know is false to promote the group. No, I have not and will not follow through. I admit it only to say that I am no better than anyone else. I want to do this for a living. I love the paranormal and all its facets. As a law school graduate, I love a logical discussion. I love the differing theories. The stepping stone to making my dream a reality is to get on television. The way to get on television is to have compelling and unique evidence. I thought I had it. I had to review this piece of evidence multiple times with my co-founder. We finally agreed it was an inverse of a shadow reflected in the television. I could have easily contacted multiple cable shows and showed it. It would have been hard for people to disprove. I haven’t and I won’t. In order to become a lawyer, one must pass an ethics exam (I can hear you all laughing now). Some states require a higher ethics score than others (the laughter continues). So while we may be tempted, most lawyers do not succumb to temptation (again, riotous laughter).

As Peter Griffin would say, the real reality of the situation is this: yes, I may get a quick shot at fame and fortune, but (1) it may be fleeting and (2) if I am found out as a fraud, I will never be able to investigate for a living as all my credibility would be shot. I need to think long term and for that, honesty is always the best policy. 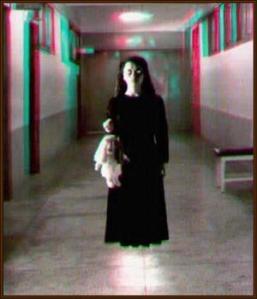